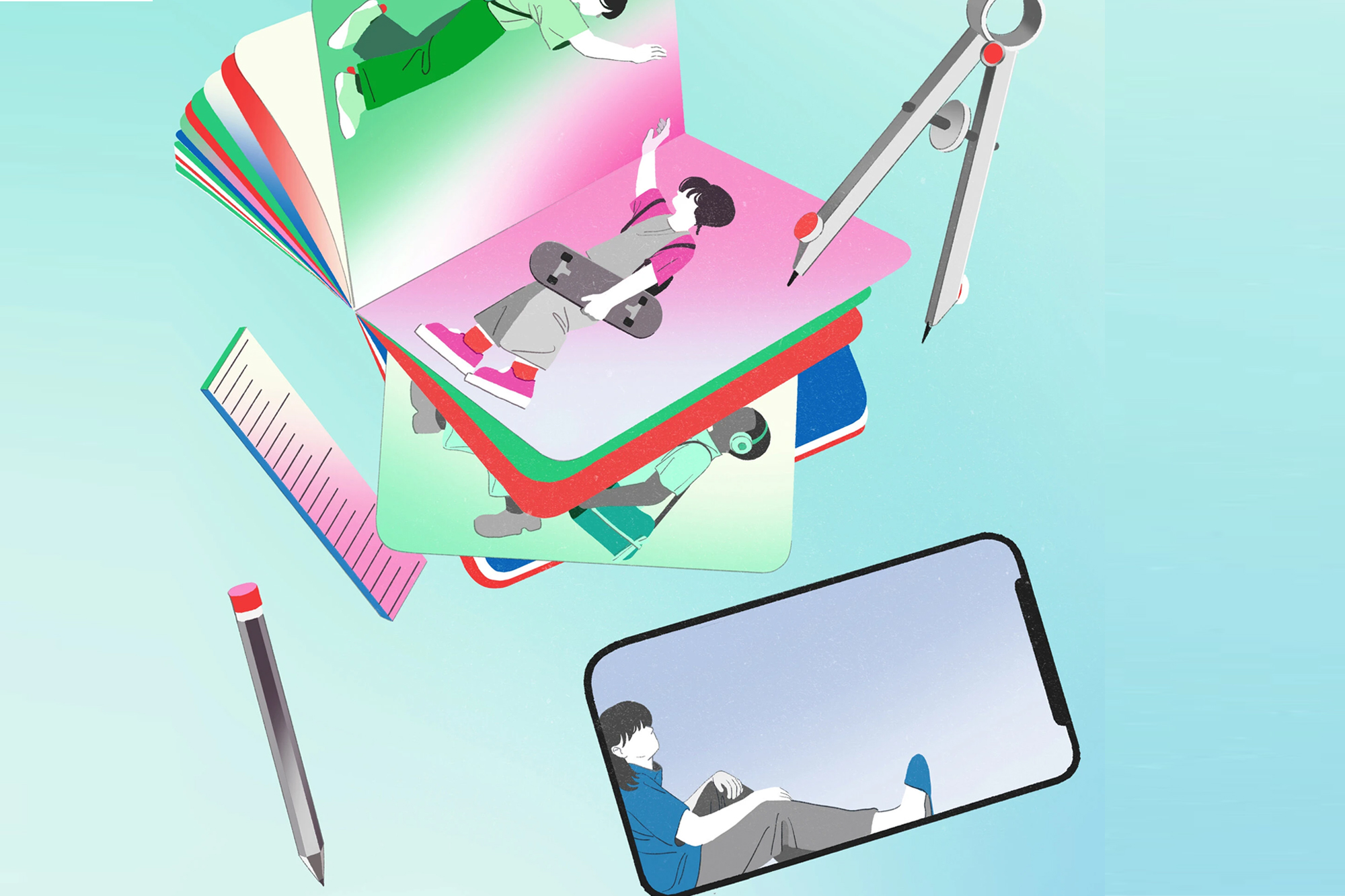 As students return to school in the coming weeks, there will be close attention to their mental health. Many problems will be attributed to the Covid pandemic, but in fact we need to look back further, to 2012.

That’s when rates of teenage depression, loneliness, self-harm and suicide began to rise sharply. By 2019, just before the pandemic, rates of depression among adolescents had nearly doubled.

When we first started to see these trends in our work as psychologists studying Gen Z (those born after 1996), we were puzzled. The U.S. economy was steadily improving over these years, so economic problems stemming from the 2008 Great Recession were not to blame. It was difficult to think of any other national event from the early 2010s that reverberated through the decade.

We both came to suspect the same culprits: smartphones in general and social media in particular. Jean discovered that 2012 was the first year that a majority of Americans owned a smartphone; by 2015, two-thirds of teens did too. This was also the period when social media use moved from optional to ubiquitousamong adolescents.

Jonathan learned, while writing an essay with the technologist Tobias Rose-Stockwell, that the major social media platforms changed profoundly from 2009 to 2012. In 2009, Facebook added the like button, Twitter added the retweet button and, over the next few years, users’ feeds became algorithmicized based on “engagement,” which mostly meant a post’s ability to trigger emotions.

By 2012, as the world now knows, the major platforms had created an outrage machine that made life online far uglier, faster, more polarized and more likely to incite performative shaming. In addition, as Instagram grew in popularity over the next decade, it had particularly strong effects on girls and young women, inviting them to “compare and despair” as they scrolled through posts from friends and strangers showing faces, bodies and lives that had been edited and re-edited until many were closer to perfection than to reality.

For many years now, some experts have been saying that smartphones and social media harm teens while others have dismissed those concerns as just another moral panic, no different from those that accompanied the arrival of video games, television and even comic books. One powerful argument made by skeptics is this: The smartphone was adopted in many countries around the world at approximately the same time, so why aren’t teens in all of these countries experiencing more mental health issues the way Americans have been? Where’s the evidence for that?

This is a difficult question to answer because there is no global survey of adolescent mental health with data before 2012 and continuing to the present. However, there is something close. The Program for International Student Assessment, or PISA, has surveyed 15-year-olds in dozens of countries every three years since 2000. In all but two administrations, the survey included six questions about loneliness at school. Loneliness is certainly not the same as depression, but the two are correlated — lonely teens are often depressed teens, and vice versa. And loneliness is painful even without depression.

So what does the PISA survey show? In a paper we just publishedin The Journal of Adolescence, we report that in 36 out of 37 countries, loneliness at school has increased since 2012. We grouped the 37 countries into four geographic and cultural regions, and we found the same pattern in all regions: Teenage loneliness was relatively stable between 2000 and 2012, with fewer than 18 percent reporting high levels of loneliness. But in the six years after 2012, rates increased dramatically. They roughly doubled in Europe, Latin America and the English-speaking countries, and rose by about 50 percent in the East Asian countries.

This synchronized global increase in teenage loneliness suggests a global cause, and the timing is right for smartphones and social media to be major contributors. But couldn’t the timing just be coincidental? To test our hypothesis, we sought data on many global trends that might have an impact on teenage loneliness, including declines in family size, changes in G.D.P., rising income inequality and increases in unemployment, as well as more smartphone access and more hours of internet use. The results were clear: Only smartphone access and internet use increased in lock step with teenage loneliness. The other factors were unrelated or inversely correlated.

These analyses don’t prove that smartphones and social media are major causes of the increase in teenage loneliness, but they do show that several other causes are less plausible. If anyone has another explanation for the global increase in loneliness at school, we’d love to hear it.

We have carried out an extensive review of the published research on social media and mental health, and we have found a major limitation: Nearly all of it, including our own, looks for effects of consumption on the individuals doing the consuming. The most common scientific question has been: Do individual teens who consume a lot of social media have worse health outcomes than individual teens who consume little? The answer is yes, particularly for girls.

We believe, however, that this framework is inadequate because smartphones and social media don’t just affect individuals, they affect groups. The smartphone brought about a planetary rewiring of human interaction. As smartphones became common, they transformed peer relationships, family relationships and the texture of daily life for everyone — even those who don’t own a phone or don’t have an Instagram account. It’s harder to strike up a casual conversation in the cafeteria or after class when everyone is staring down at a phone. It’s harder to have a deep conversation when each party is interrupted randomly by buzzing, vibrating “notifications.” As Sherry Turkle wrote in her book “Reclaiming Conversation,” life with smartphones means “we are forever elsewhere.”

A year before the Covid-19 pandemic began, a Canadian college student sent one of us an email that illustrates how smartphones have changed social dynamics in schools. “Gen Z are an incredibly isolated group of people,” he wrote. “We have shallow friendships and superfluous romantic relationships that are mediated and governed to a large degree by social media.” He then reflected on the difficulty of talking to his peers:

There is hardly a sense of community on campus and it’s not hard to see why. Often I’ll arrive early to a lecture to find a room of 30+ students sitting together in complete silence, absorbed in their smartphones, afraid to speak and be heard by their peers. This leads to further isolation and a weakening of self-identity and confidence, something I know because I’ve experienced it.

All young mammals play, especially those that live in groups like dogs, chimpanzees and humans. All such mammals need tens of thousands of social interactions to become socially competent adults. In 2012 it was possible to believe that teens would get those interactions via their smartphones — far more of them, perhaps. But as data accumulates that teenage mental health has changed for the worse since 2012, it now appears that electronically mediated social interactions are like empty calories. Just imagine what teenagers’ health would be like today if we had taken 50 percent of the most nutritious food out of their diets in 2012 and replaced those calories with sugar.

So what can we do? We can’t turn back time to the pre-smartphone era, nor would we want to, given the many benefits of the technology. But we can take some reasonable steps to help teens get more of what they need.

One important step is to give kids a long period each day when they are not distracted by their devices: the school day. Phones may be useful for getting to and from school, but they should be locked up during the school day so students can practice the lost art of paying full attention to the people around them — including their teachers.

A second important step is to delay entry into social media, ideally keeping it entirely out of elementary and middle schools. At present, many 10- and 11-year-olds simply lie about their age to open accounts, and once that happens, other kids don’t want to be excluded, so they feel pressured to do the same.

The platforms should — at a minimum — be held legally responsible for enforcing their stated minimum age of 13. Since social media platforms have failed to do so using post-hoc detection methods, they should be required to implement age and identity verification for all new accounts, as many other industries have done. Verified users could still post under pseudonyms, and the verification could be done by reliable third parties rather than by the platforms themselves.

Even before Covid-19, teens were finding themselves increasingly lonely in school. The rapid transition to smartphone-mediated social lives around 2012 is, as we have shown, the prime suspect. Now, after nearly 18 months of social distancing, contagion fears, anxious parenting, remote schooling and increased reliance on devices, will students spontaneously put away their phones and switch back to old-fashioned in-person socializing, at least for the hours that they are together in school? We have a historic opportunity to help them do so.

Jonathan Haidt (@JonHaidt) is a social psychologist at New York University’s Stern School of Business and a co-author of “The Coddling of the American Mind.” Jean M. Twenge (@jean_twenge), a professor of psychology at San Diego State University, is the author of “iGen: Why Today’s Super-Connected Kids Are Growing Up Less Rebellious, More Tolerant, Less Happy — and Completely Unprepared for Adulthood.”

The Times is committed to publishing a diversity of letters to the editor. We’d like to hear what you think about this or any of our articles. Here are some tips. And here’s our email: letters@nytimes.com.