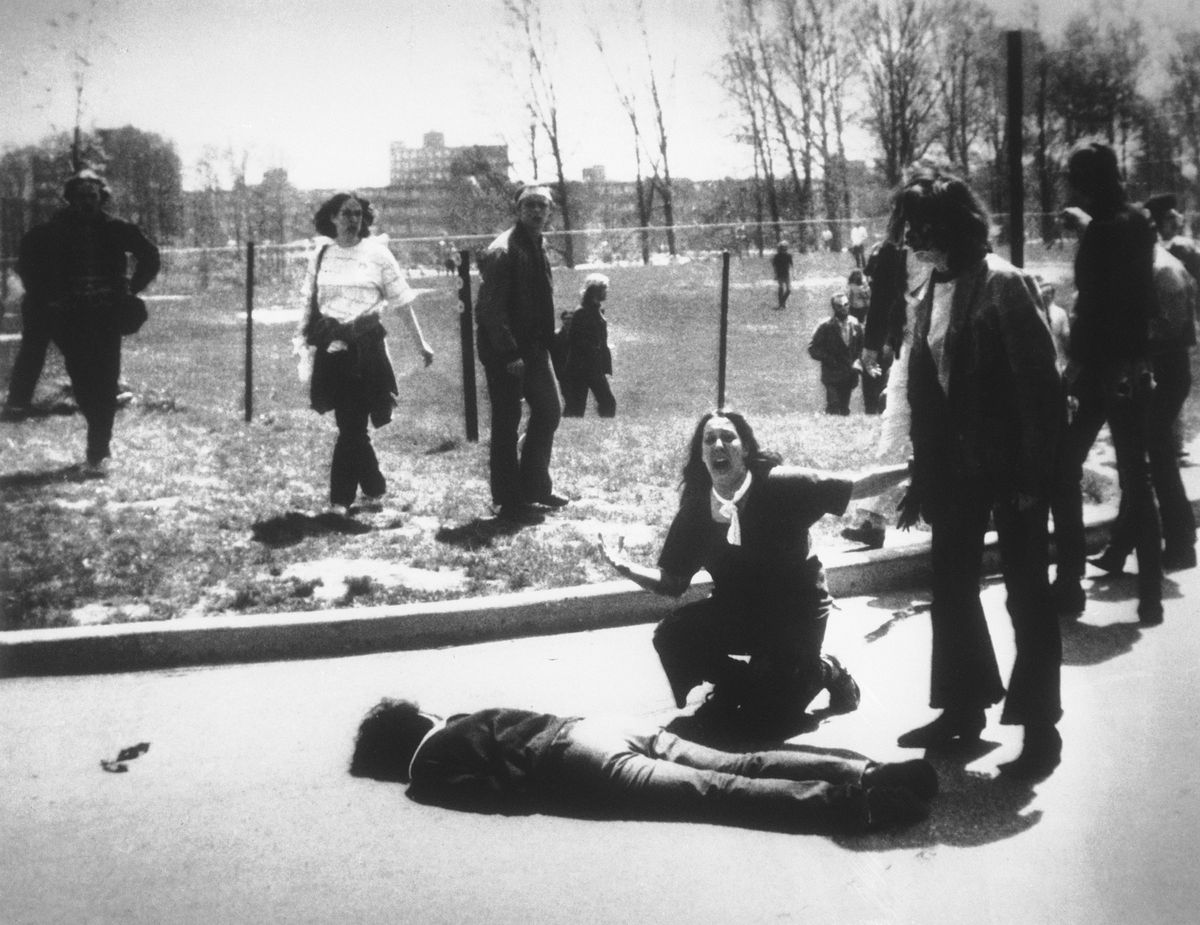 The guilty verdict in the Derek Chauvin murder trial was, in no small part, the result of a video taken by a teenaged girl who witnessed the murder of George Floyd on May 25, 2020.

Fifty years earlier, on May 4, 1970, another teenaged girl found herself on the other side of a camera, her arms extended and mouth agape in horrified anguish, kneeling beside the body of Jeffrey Miller, one of four Kent State students shot and killed protesting against the U.S. invasion of Cambodia and the presence of the Ohio National Guard on campus.

In an April 19, 2021 story in the Washington Post, reporter Patricia McCormick wrote about her meeting with a wary Mary Ann Vecchio, the then 14-year-old at the center of the Kent State photo.

McCormick recalled, as “Mary Ann watched the video of George Floyd’s dying moments, she felt herself plummet through time and space — to a day almost exactly 50 years earlier. On that afternoon in 1970, the world was just as riveted by an image that showed the life draining out of a young man on the ground, this one a black-and-white still photo” taken by Kent State student John Filo.

The impact of certain images cannot be underestimated. In her story, McCormick referenced a few more, including the protester standing alone in front of a line of tanks in Tiananmen Square in China and the unforgettable photo of Kim Phuc, the naked Vietnamese girl fleeing napalm that has just set her home afire.

Perhaps a lesser-known photo was the subject of the book Sons of Mississippi.

The photo, which originally appeared in a 1962 issue of Life magazine, portrays a gathering of seven Mississippi sheriffs at the University of Mississippi just prior to the admission of its first black student James Meredith.

One of the sheriffs is wielding an axe handle as if were a baseball bat, to the obvious delight of the others. They are anticipating the upheaval to come as James Meredith is about to integrate the University of Mississippi.

In his discussion of the photo of the sheriffs, the author Paul Hendrickson cited poet Mark Strand who, referring to a certain artist’s (Edward Hopper) work, said “The shadow of dark hangs over them, making whatever narratives we construct around them seem sentimental and beside the point.” Which, to me, is another way of saying, sometimes no words are necessary.

When she was called to the witness stand in the Derek Chauvin murder trial, Darnella Frazier was asked by the prosecutor, “What did you see?” She responded, “A man terrified and scared, begging for his life.”

Yet, Darnella’s video requires no accompanying narrative – it speaks for itself.
According to McCormick, when Mary Ann Vecchio watched the video of George Floyd’s death last May, “she was so shaken . . . she jumped off her couch and yelled at the crowd in the video.
“Mary Ann,” McCormick said to her, “It seems to me that you’re still that girl in the photo, you’re still that girl saying, ‘Doesn’t anyone see what’s happening here?’”

Mary Ann, who confesses to feeling stuck in that moment half-a-century ago, says that she feels like she needs to do something good. To which McCormick tries to reassure her, “In that moment when you knelt over Jeffrey Miller’s body you expressed the grief and horror that so many people were feeling. You helped end the Vietnam War.”

Fifty years later, when she felt helpless to do anything else to deal with the terror of a traumatic event playing out at close range before her eyes and in the shadow of darkness, Darnella Frazier had the presence of mind to take out her cell phone in broad daylight and start filming. In so doing she brought light to a troubled nation and she brought justice for George Floyd.