At the event, the audience, which consisted of healthcare professionals and community members,  learned that over 300,000 babies in the United States are born premature each year, and the statistics indicate a wide racial disparity. According to the New York State Department of Health, a black woman is up to four times more likely to die in childbirth than a white mother. In Nassau County, the infant mortality rate per 1,000 live births is 9.4 for black babies versus the 2.2 reported for white non-Hispanic babies.

The three communities at highest risk are (in order) Roosevelt, Hempstead and Westbury/New Cassel. 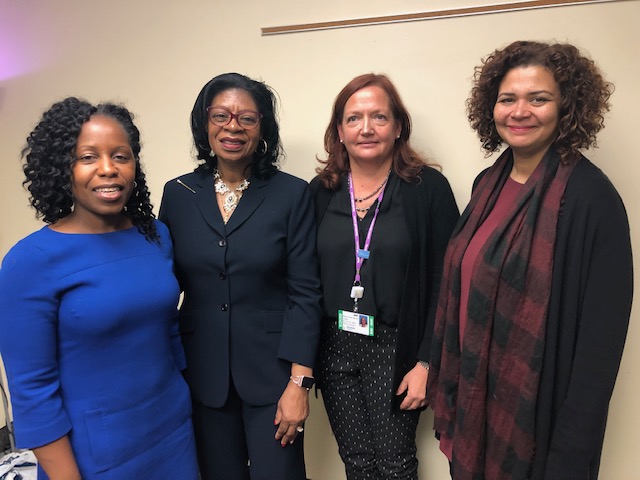 The Guidance Center, in partnership with Hofstra University, has also created a program called Birth Justice Warriors, which focuses on improving the health of black mothers and their babies through education and advocacy efforts. Birth Justice Warriors are trained to educate the community, including women, pediatricians, nurses, elected officials and others, regarding the racial disparities in an effort to create real change. The ultimate goal is to pass legislation that guarantees that this crucial information is delivered to all women of child-bearing age.

Town of North Hempstead Councilwoman Viviana Russell shared her personal story of having given birth to a premature daughter in 1995. Russell felt that her doctors were not listening to her concerns. Luckily, her daughter, who weighed only 1 pound and 12 ounces, survived and is now a mother herself, but the experience

made Russell want to help others. “As women, we are nurturers, but we need to learn that pre- and post-natal care is as important for us as for our babies.”

Dr. Martine Hackett from Hofstra University, a co-founder of Birth Justice Warriors, pointed out that maternal mortality rates are rising in the United States, whereas they are going down almost everywhere else in the world. She said that historical patterns of racism have affected black women even in today’s world. “While individual behaviors are important, we must also acknowledge discriminatory biases in the medical community and take steps to reverse them.”

Adriann J. Combs, Clinical Director of OB/GYN at Northwell Health, presented the March of Dimes Score Card on NY State Prematurity births. While the state received a grade of B, Nassau County only earned a C. “The March of Dimes goals are to ensure improved care for all races, to encourage research and conduct advocacy efforts,” said Combs.

To find out more about the Birth Justice Warriors, contact Dr. Walthrust-Taylor at (516) 997-2926, ext. 229, or email NTaylorWalthrust@northshorechildguidance.org.