Many providers don’t take insurance because they say reimbursements are too low, forcing families to pay out of pocket. 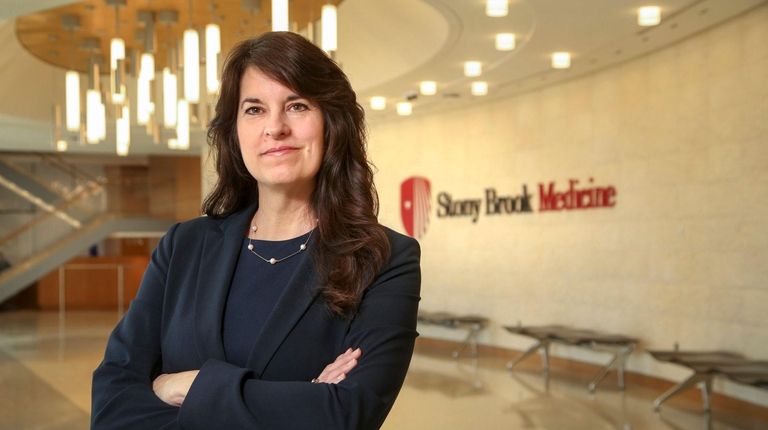 Dr. Kristie Golden, an associate director at Stony Brook Medicine, said lower payments from insurers have pushed many medical students to choose fields other than psychiatry, and when providers do not accept insurance not everyone can afford to pay. Photo Credit: Newsday/John Paraskevas

A shortage of mental health professionals has forced some Long Islanders to wait months for an appointment, and patients who do get care without a delay often pay out of pocket because many psychiatrists, psychologists and other therapists don’t take insurance.

Insurance reimbursements for those care providers are too low, and don’t come close to those of several other medical specialties, experts at Long Island’s largest health systems said.

And with demand for treatment high, psychiatrists often only treat patients who can afford to pay out of pocket.  That can mean hundreds of dollars for a 45-minute session. 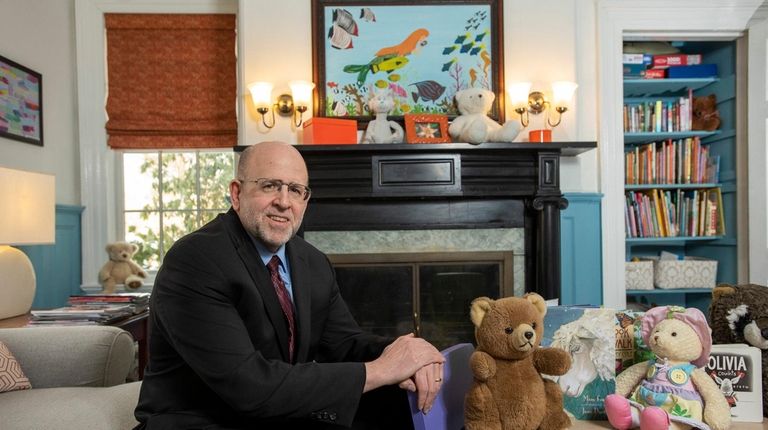 Some providers spend time at lower pay at organizations that help those who can’t pay for care. North Shore Child and Family Guidance Center in Roslyn Heights, led by Andrew Malekoff, is such a service, which operates by raising funds and seeking donors and grants. Photo Credit: Howard Simmons

“What makes the difficulty accessing care particularly difficult for people and families living with mental health and substance-use disorders is that stigma, and the shame it generates leads to delays in their asking for help in the first place,” center executive director Andrew Malekoff said. “Some may wait weeks, months and even years to ask for help.”

In addition, the lower insurance reimbursements have pushed medical students to choose fields other than psychiatry, said Dr. Kristie Golden, associate director of operations at Stony Brook Medicine. Golden said the demand won’t be met unless “psychiatrists come up with ways to make a comparable living and pay off school debt.”

There is also a broader economic cost. Depression and anxiety cost the global economy $1 trillion annually in lost productivity and absenteeism, according to the World Health Organization. But the organization said for every $1 spent on treating those disorders, there is a $4 return in better health and ability to work.

According to the National Alliance on Mental Illness, about 19 percent of adults in the United States, or 43.8 million people, experience some type of mental illness, such as depression, anxiety or bipolar disorder, in a given year. About 21 percent of teenagers experience a severe mental disorder at some point during their life, the group said. 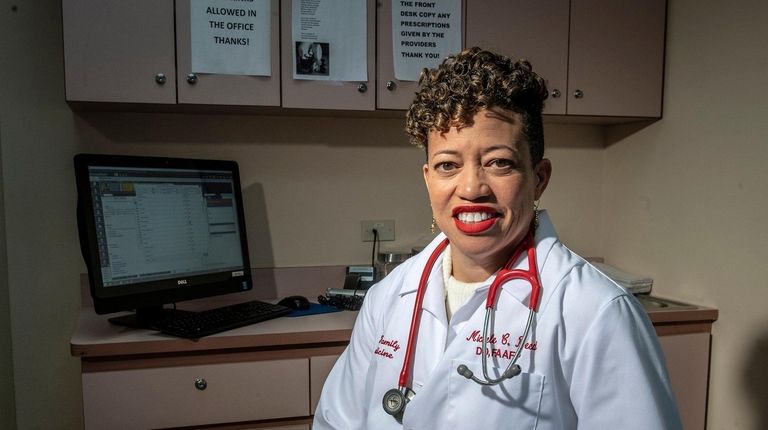 Dr. Michele Reed, a family practitioner in Garden City, says she struggles to find psychiatrists who take the same insurance she does, so it’s difficult for her to send her patients who need help to a psychiatrist. Photo Credit: Newsday/J. Conrad Williams Jr.
Against that backdrop, just 55 percent of psychiatrists nationwide accept insurance, according to a National Council for Behavioral Health advisory board, a Washington-based organization that advocates for the mental health profession. In comparison, more than 90 percent of primary-care physicians take private insurance or Medicare, according to the Kaiser Family Foundation, a nonprofit health care policy group.

Many psychiatrists “who do take insurance come to realize that there isn’t enough time in the day to see patients and then handle all the paperwork, requests and denials that come with taking insurance,” said Dr. Ronald Brenner, chief of behavioral health services for Catholic Health Services in Rockville Centre.

Although regional numbers are hard to come by, the percentage of psychiatrists who don’t take insurance could be higher on Long Island, said Dr. Aaron Pinkhasov, chairman of the Department of Behavioral Health at NYU Winthrop Hospital in Mineola.

“There are more people who could pay out of pocket, so it’s a more feasible option for doctors in a region like this,” Pinkhasov said. 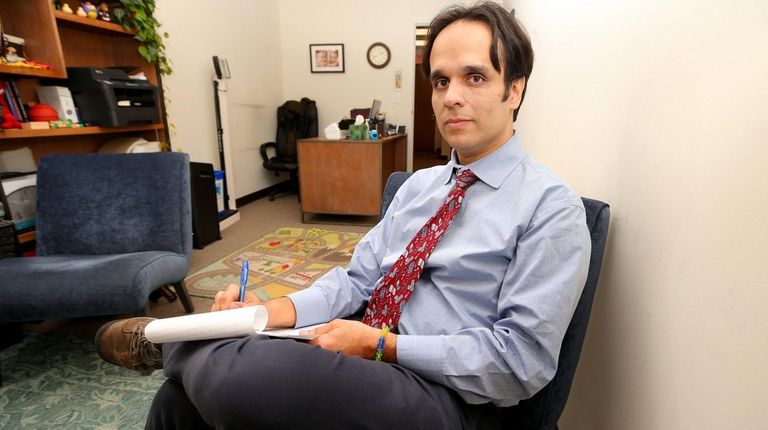 Dr. Stephen Perret, a private child psychiatrist in Westbury, says its “terribly frustrating” not accepting insurance, but the $60 insurance pays for a visit would not cover his costs, which include $200,000 in student loan debt. “The system is a mess,” he says. Photo Credit: Brad Penner

But Long Islanders still have better access than residents of rural areas of New York and the nation, where finding providers is even more difficult, experts said. In metropolitan areas, there are 17.5 mental health providers per 100,000 people, according to an American Journal of Preventive Medicine analysis completed in 2016. The number of providers falls to 5.8 per 100,000 in non-metro counties.

“It’s all perspective, and we are used to an ease of entry, where we don’t need to drive more than 10 minutes to get what we need,” said Janet Kahn-Scolaro, administrative director for behavioral health and family medicine services at South Nassau Communities Hospital in Oceanside. “But even here it could be better.”

Christine Sampson, 37, of Amagansett, said she traveled more than two hours to Hempstead, because she couldn’t find a nearby psychiatrist who took her insurance without a long wait to make an appointment.

“It took me a month just to find a psychiatrist, and he was far away,” she said. “I was desperate, so I did it.” 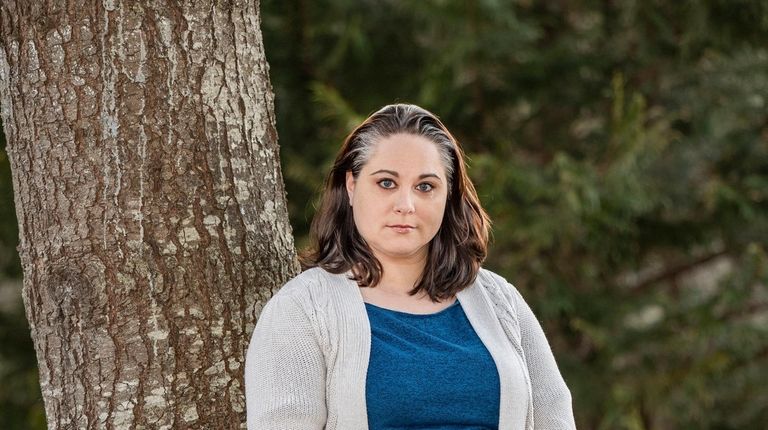 Patient Christine Sampson had difficulty finding a psychiatrist who would take her insurance on the East End and traveled west for hours for care. She now sees a doctor closer to her home in Amagansett and her co-pay for mental health services is $70. Photo Credit: Veronique Louis

Sampson, who has bipolar disorder, said she now sees a local psychiatrist and therapist, and her six medicines are covered by insurance. Her copay for mental health services is $70.

“One of my medicines would cost $900 without insurance,” she said. “I’m fortunate that on my current insurance, I pay a $40 copay, and that’s it.”

“I really tried to get therapy, and in every case it was either too pricey or the waiting list was months long,” she said. “I gave up.”

It can be even more difficult to find child psychiatrists who take insurance because there is a shortage of them in general, said Dr. Stephen Perret, who runs a private child psychiatry practice in Westbury.

“We come in to this profession to help people, so it’s terribly frustrating that I can’t take [insurance],” Perret said. “I wouldn’t be able to cover the rent, never mind pay my employees, pay off my $200,000 in student loans or feed my family with the $60 insurance pays for a visit. The system is a mess.”

Sheree Simmons of Brentwood, who is on Medicaid, said she pays $400 to $800 out of pocket every month for her daughter to see a psychiatrist in West Islip. The cost varies, depending on how often she needs to go.

She said she calls her daughter “three or four times per day while she is at school to make sure she is all right. It’s all very difficult.”

The lack of providers can also be maddening for family practitioners who can’t find the help needed for their patients, said Dr. Michele C. Reed, who has offices in Garden City and Rosedale, Queens.

“It’s a daily issue,” Reed said. “I routinely see patients, including children, who have anxiety issues. We try to find them a psychiatrist, psychologist, social worker or therapist who can help. But unfortunately we often tell them to call their insurer, because mental health care providers can’t accept what insurers are willing to pay. Also, usually patients who have insurance don’t feel comfortable going to a hospital-based clinic because, more times than not, they don’t feel like they’ll get the same level of privacy and intimacy” that they would in a private practice.

Experts said reimbursements are lower because insurers struggle to quantify the cost for mental health care, which can vary widely for patients with similar diagnoses, depending on the type of treatment. There is also a long-standing lack of recognition that mental illness is as serious as physical illness, and can be tied to other illnesses, they said.

In an effort to make mental health services more accessible, some providers spend time — often at lower pay — at organizations that deliver services to those who can’t pay for care.

For instance, in addition to his private practice, Perret works at the North Shore Child and Family Guidance Center.

“It’s a mission for me, and for others,” he said. “We give whatever we can to help people who need it but can’t afford the care otherwise.”

The center operates by raising between $1.5 million and $2 million a year through fundraising events, individual contributions and grants, executive director Malekoff said.

It accepts all insurance and treats between 5,000 and 6,000 children and their family members yearly, he said. The organization has eight full- and part-time psychiatrists on staff.

“Only through our fundraising are we able to …  turn no one away for inability to pay and offer a rapid response with no waiting list,” he said, adding that often families are desperate by the time they seek help.

South Nassau, which is part of the Mount Sinai Health System, has assigned a psychologist and bilingual social worker to provide behavioral health services at the Center for Primary and Behavioral Care in Hempstead and at a family medical practice in Oceanside. In less urgent cases a primary-care physician can manage the psychiatric medication in collaboration with a psychiatrist, Kahn-Scolaro, at South Nassau, said.

“For patients who require the specialist, the psychiatrist can handle the care directly,” she added.

“We plan to dot the landscape with this type of practice … They’re in great demand,” said Dr. Blaine Greenwald, Northwell’s vice chairman of psychiatry.

To make it work financially, psychiatrists at the Manhasset office see about 15 to 20 patients daily, and only treat people who need medication as part of their care, Greenwald said.

“The psychiatrist can spend 15 to 30 minutes with a patient without being hurried,” he said. “The practice can’t be financially viable if a psychiatrist spends their time doing psychotherapy too.”

“Therapists see the patients for other services,” he said.

Stony Brook also uses tele-psychiatry to deliver behavioral health care to patients on the East End, where there are fewer providers to meet the demand.

“It’s easy and convenient for the patients,” Golden said. “A patient goes to a primary-care location and they are seen by a remote behavioral health provider at Stony Brook.”

New York State is expanding telehealth regulations to allow patients to be seen in a variety of locations, including their homes.

But there are federal restrictions that limit the reimbursement of these services to Medicare beneficiaries. A bill that would lift restrictions expired without a vote in 2018.

“We take everyone, and it can be difficult because it’s overrun,” said Brenner, who is in charge of the health system’s behavioral health care. The facility handled 28,000 visits last year.

Brenner said CHS is also considering opening a clinic in Suffolk.“ “You’d think a clinic would be a profitable enterprise, but given the billing structure, it’s far more complicated, and many clinics struggle,” he said.

NYU Langone this year launched a corporate program in which companies contract directly with the Manhattan-based health system for mental health services.

“We negotiate directly with employers and then provide quality care for a fair level of compensation,” said Dr. Charles Marmar, chairman of the psychiatry department at NYU Langone. “More than 100 behavioral health staff becomes in-network for employees.”

Two large companies have signed on, and others have expressed interest, said Dr. David Ginsberg, the vice chairman of NYU Langone’s psychiatry department.

“It’s a very strong retention tool for companies,” he said.

More than 90 percent of primary care physicians take insurance, while only 55 percent of psychiatrists do.