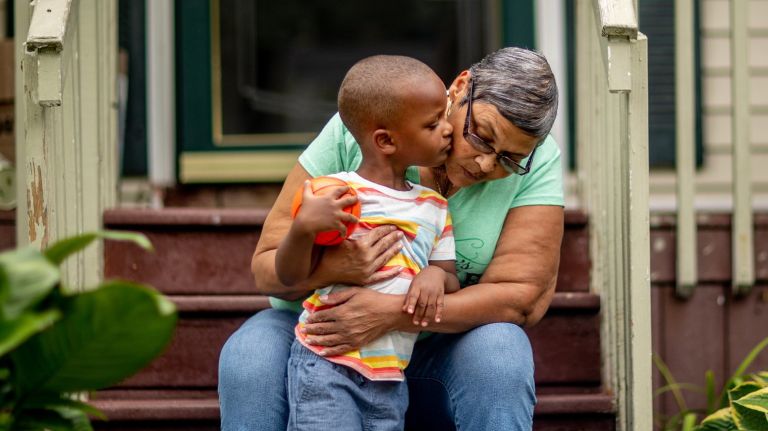 Parenting, the Second Time Around

When COVID-19 took the life of 36-year-old Krystal Colman in April, Christina Colman, 60, of Coram, inherited a precious gift: her grandson Kacen, 2.

Colman was hospitalized with the coronavirus at the same time as her daughter, both in Stony Brook Hospital just after Easter. Krystal previously had pleurisy, an inflammation of the membranes that surround the lungs. When the elder Colman heard a “Code Blue” — which signifies a hospital emergency in a certain location — she said to her nurse, “That’s my daughter’s room.” Says Colman: “I wasn’t there when she took her last breath. I was beyond shocked.”

Colman, who works as an office assistant at Stony Brook Hospital, immediately went to court to get custody of her grandson; she plans to raise him with the help of another of her daughters, Jasmine, 31, an elementary school nurse.

“I’m not going to tell anyone that every day is peachy and sunny when you’re trying to raise a 2½-year-old,” Colman says. It’s especially challenging when mourning the loss of a daughter at the same time the child is mourning the loss of his single-parent mother. “It’s overwhelming.”

But through word-of-mouth, Colman heard of a grandparent caregivers’ support group run by the Cornell Cooperative Extension in Riverhead. The group offers PASTA classes — it stands for Parenting the Second Time Around. The eight-week curriculum offers support to those being thrust into the new role and discusses child development, discipline and family law legal issues.

“It’s been a while since a lot of the grandparents have had 2-year-olds, 8-year-olds, teenagers in their home,” says Dinah Torres Castro, a bilingual family well-being educator for Cornell Cooperative Extension. They need to feel they can do this, she says.

Cornell also collaborates with the Amityville-based not-for-profit Hope For Youth to offer family engagement activities through a kinship caregiver grant. In August, the group resumed in-person events such as movies and field trips; a family picnic was held Aug. 30 at the Suffolk County Farm, just before Grandparents’ Day on Sept. 12. “Those things are very important when you’re going through these kinds of situations,” Colman says.Sign up for Newsday’s Family newsletter

The North Shore Child and Family Guidance Center also runs a free program called C-GRASP, Caregiver-Grandparent Respite and SupportProgram, for grandparents who are caregivers due to abandonment, substance abuse issues, incarceration or mental illness, says Nellie Taylor-Walthrust, director of the North Shore Child and Family Guidance Center’s Leed Place in Westbury. C-GRASP is run in conjunction with the Town of North Hempstead for caregiver residents 60 or older, she says.

It’s important for grandparents to see they’re not alone in what they’re doing for their families, and to be alerted to resources available to them. Grandparent caregivers often feel isolated, Taylor-Walthrust says.

“They have given up their retirement to take care of children. They don’t have a lot of social opportunities themselves.” The pandemic made their isolation and challenges worse, says Taylor-Walthrust.

“Many of them are not technologically savvy,” she says, needing guidance, for instance, with helping children to log on to their Chromebooks during at home schooling. They also initially had challenges getting food, and C-GRASP volunteers helped get supplies delivered to their doorsteps.

A CHANCE TO TALK

Melinda Stephenson, 45, an insurance verifier, and her husband, Dexter, 50, a care coordinator, of Hempstead are currently caring for five of their grandchildren, ages 8, 7, 5, 3, and 1 — after already raising seven children of their own. “Financially, it’s sometimes a struggle to take care of them, but we do it,” she says. She’s been able to talk to Torres Castro about such issues, she says.

The opportunity to talk to others is also valuable for Colman. “That’s not my greatest strength, talking about my daughter. When I start talking about my daughter, I turn into mush,” Colman says. Her daughter and grandson had already lived with her, so she feels Krystal’s absence even more strongly. Her grandson will often want to spend time in his mother’s former bedroom, Colman says.

Colman has done some virtual events and looked forward to meeting the other families in person with Kacen at the Aug. 30 family picnic, which she expects to help them move forward with healing.

Beth Whitehouse writes about families, parenting and great things to do with the kids on Long Island. She’s been a Newsday editor and shared a 1997 Newsday staff Pulitzer Prize for coverage of the crash of TWA Flight 800.