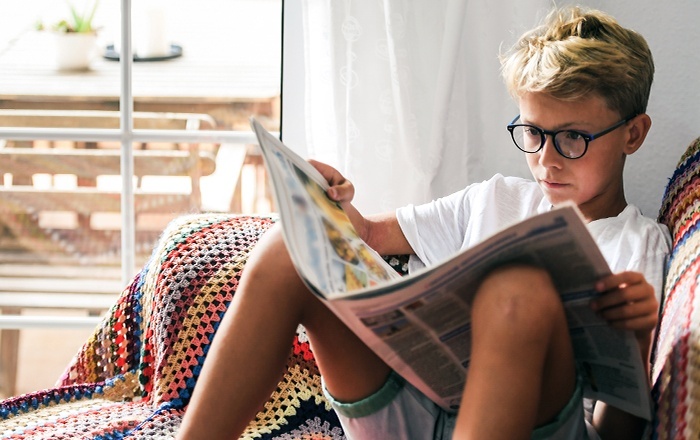 When I was 10 years old, I discovered a thick folder in a box at my home in New Jersey. I twirled the string that held the flap secure and pulled out the contents—a cache of newspaper articles dating back to the mid-1930s. The articles were from the Newark Star Ledger and the Newark Evening News.

As I sifted through the news clippings, they all had one thing in common: They were about my father and his days as a high school athlete in Newark.

When I asked him where they came from, he replied, “Oh, your grandmother cut them out of the newspaper.” My grandmother Jennie was an immigrant from the part of Russia now known as Belarus. She and my grandfather Joseph came to the U.S. sometime around the early 1900s. Neither one spoke English at the time, only Yiddish.

I’m sure my grandparents knew next to nothing about American sports, but somehow my grandmother knew that her son was doing something noteworthy if his name was always in the newspaper.

To attest to their lack of knowledge about football, years later I learned that when my grandfather—a carpenter whom I called Pop—went to his first game and saw my father’s youngest brother get gang tackled, he ran onto the field and started throwing the opposing team’s players off the pile to free his son.

I had known that my father was an athlete in his younger years, but I knew none of the details that the treasure trove of news clips revealed. One in particular came to mind almost as soon as the Coronavirus pandemic led to “sheltering-in.”

Back when I first found the articles, I spent months carefully trimming them and using Elmer’s glue to paste them into a scrapbook that I’ve kept until this day. Today, talk of quarantine led me to dig it up.

As I flipped through the pages, I found an article with this long headline: Test Guard After Brother Gets Scarlet Fever. Streaks Minus Star, Meet St. Benedict Prep’s Gray Bee. Ace’s Return Hinges On Condition. My father Izzy was a guard on the basketball team.

The article, written by someone named Frank J. Fagan, went on to state: “The chances of South Side High School’s Sun Streaks in the state basketball tournament grew dimmer today when it became known that Izzy Malekoff, star guard, may be lost to the squad for the remainder of the season. Albert Malekoff, the South Side player’s younger brother, was taken down with Scarlet Fever on Saturday. Izzy immediately took up quarters with a teammate who lives near him.”

Fagan went on to write, “The Board of Health, however, has quarantined Izzy, who is to take a test today to discover if the fever germs have invaded his system . . . If it is found that the schoolboy athlete has contracted the germ, he will not be allowed to return to school for a month.”

Back in those days, signs were posted on homes of those who were infected that read:  “Quarantine Scarlet Fever. No one shall enter or leave these premises except as provided by the State Department of Health or Local Board of Health.”

Although I have not done an exhaustive study on scarlet fever, what I learned is that there is no vaccine; recommended prevention includes frequent handwashing, not sharing personal items and staying away from other people when infected. I couldn’t find anything about six feet or wearing masks.

In the early 1900s, before antibiotics were available, it was a leading cause of death in children. Can you imagine if that was true in today’s Covid-19 pandemic? Perhaps some of our fellow Americans who appear to think older people are expendable would think twice.

In case you’re wondering, for some reason at the time I never asked my father how it all turned out. The story left my mind after first reading it.

Andrew Malekoff is the Executive Director of North Shore Child & Family Guidance Center, the leading children’s mental health agency on Long Island. The Guidance Center is seeing new and existing clients via telephone and video during the COVID-19 crisis. To make an appointment, call (516) 626-1971. Visit www.northshorechildguidance.org for more information.