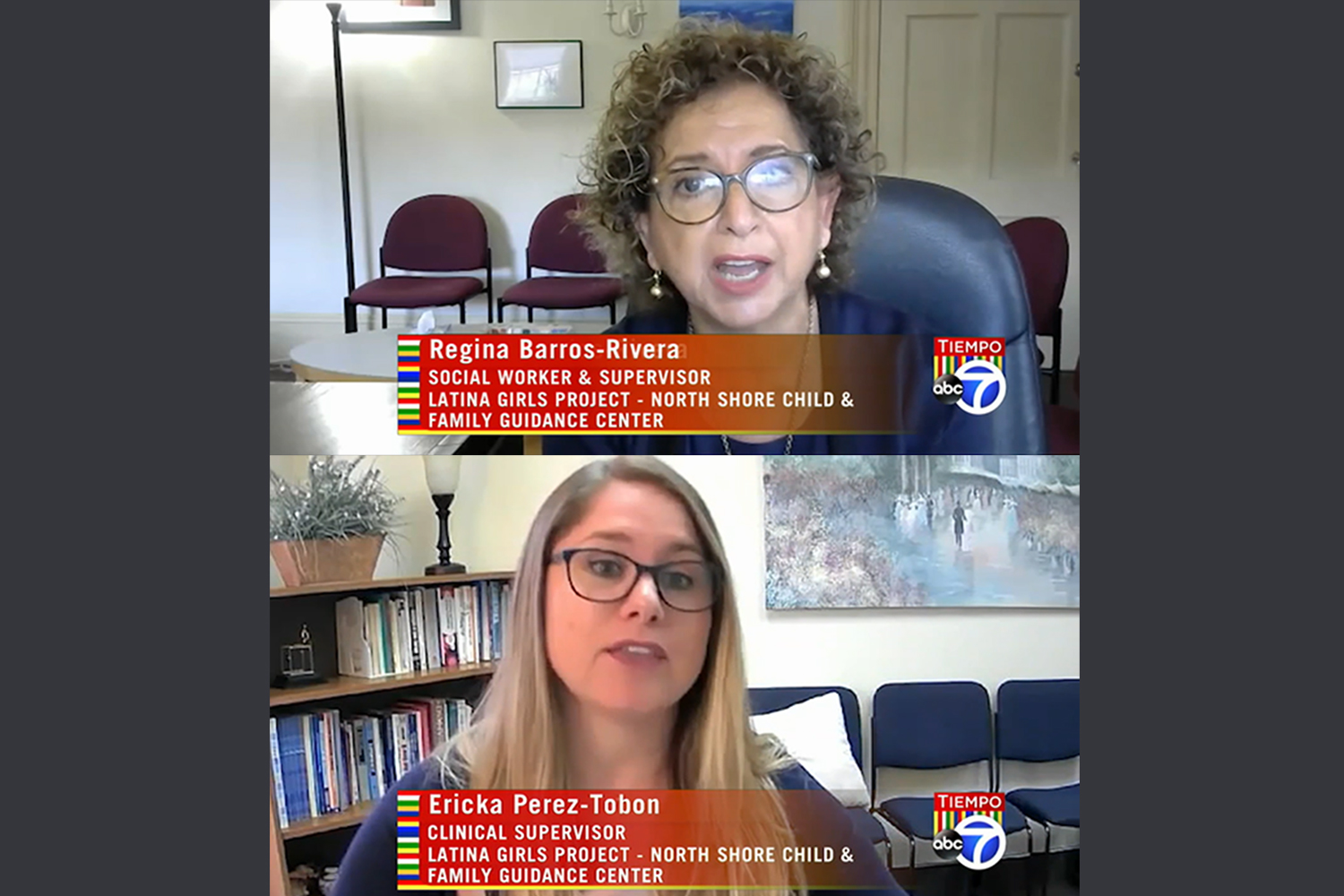 How Kids Are Affected By the Drug Epidemic

Despite feeling blindsided, many of us now know that we are living in the midst of an unprecedented drug epidemic. According to the U.S. Department of Health and Human Services, since 1999, the rate of overdose deaths including prescription pain relievers, heroin and synthetic opioids such as fentanyl, nearly quadrupled.

In the intervening years, many steps have been taken to help save lives. These include improving prescribing practices and expanding access to medication-assisted treatment and the use of Naloxone.

Medication-assisted treatment combines behavioral therapy and medications such as methadone or buprenorphine to treat opioid addiction. Through affordable, accessible and quality care people can recover and go on to live productive lives.

Naloxone is used to treat a narcotic overdose in an emergency situation by reversing the effects of opioids, including slowed breathing or loss of consciousness.

Notwithstanding the increased attention to lifesaving measures, there is relatively little focus on the devastating impact of addiction on children living in families where a parent is addicted to drugs or alcohol.

There are more than 8 million children under 18 years of age that are growing up in homes with alcohol and other drug-abusing parents. These young people are likely to become alcohol or drug abusers themselves without intervention.

Parental alcoholism and drug addiction influence the use of alcohol and other drugs in several ways. These include increased stress and decreased parental monitoring that contributes to adolescents’ joining peer groups that support drug use.

Children who grow up with an addicted parent learn to distrust to survive. When unpredictability dominates one’s life, he or she is likely to be wary, always sensing disappointment lurking nearby.

Children growing up with an addicted parent become uncomfortably accustomed to living with chaos, uncertainty and unpredictability. When a child grows up under these conditions, they learn to guess at what normal is.

Denial, secrecy, embarrassment and shame are common experiences of children who live with an addicted parent. Even seeking help outside of the family might in itself be seen as an act of betrayal, a step toward revealing the family secret. The stigma of addiction can leave chemically dependent persons and family members feeling utterly alone in the world.

Children who grow up with an addicted parent live with the unspoken mandate – don’t talk, don’t trust, don’t feel.

Growing up with an addicted family member leaves children with little hope that things will ever change. I am reminded of a parable about the small village on the edge of a river.

Although they could not save all the babies, the rescue squad members felt good and were lauded for saving as many babies as they could. However, one day, one of the villagers asked: “Where are all these babies coming from? Why don’t we organize a team to head upstream to find out who’s throwing the babies into the river in the first place!”

Mobilizing resources to pull babies from the river, while neglecting the ones left behind makes no sense.

Andrew Malekoff is the Executive Director of North Shore Child & Family Guidance Center, which provides comprehensive mental health and chemical dependency services for children from birth through 24 and their families. To find out more, visit www.northshorechildguidance.org.

This article appeared in the Behavioral Health News, Volume 5, Number 2, Fall 2017, p. 20, under the title: Context Counts in Caring for Chemically Dependent Kids and Families 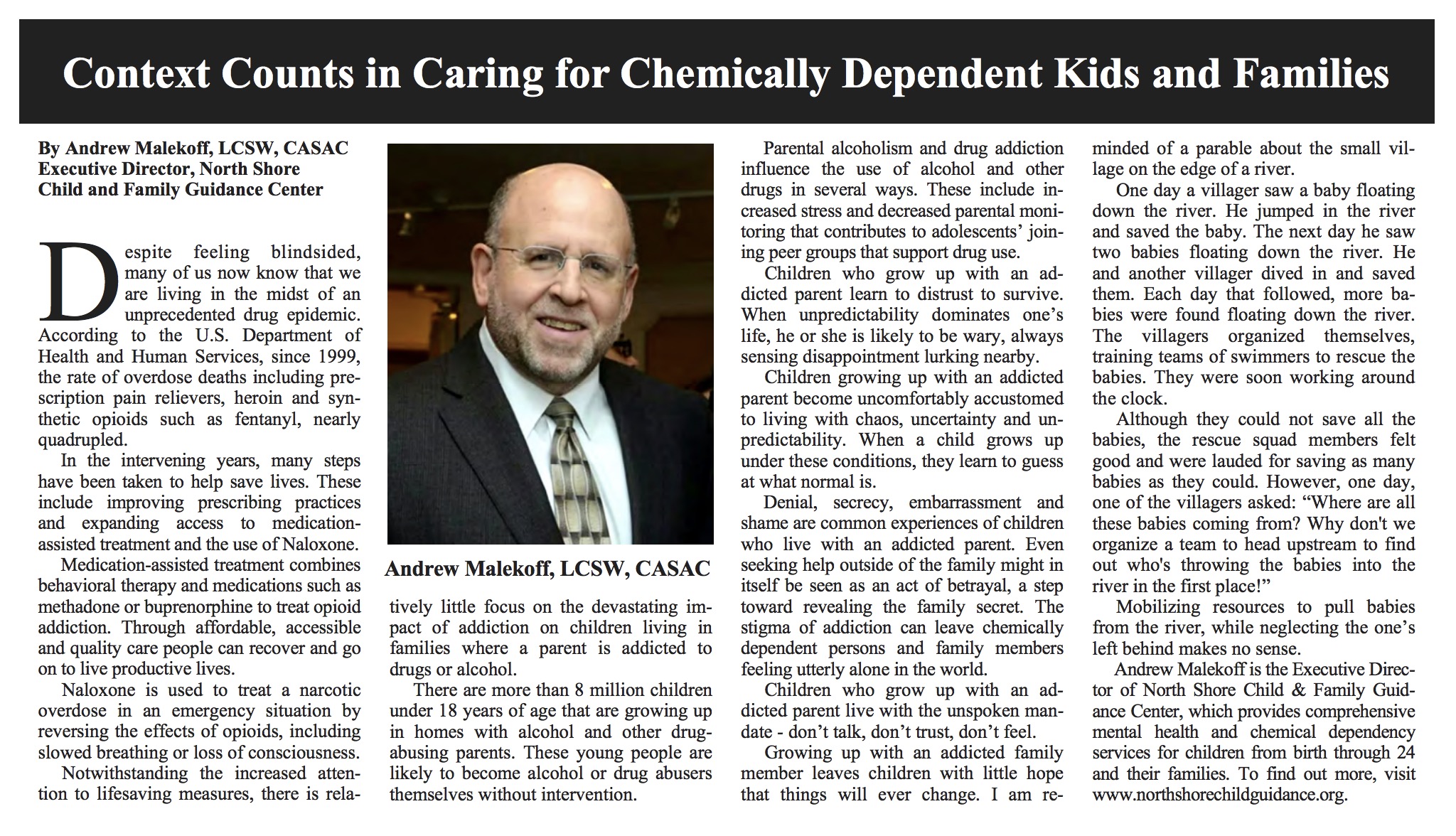