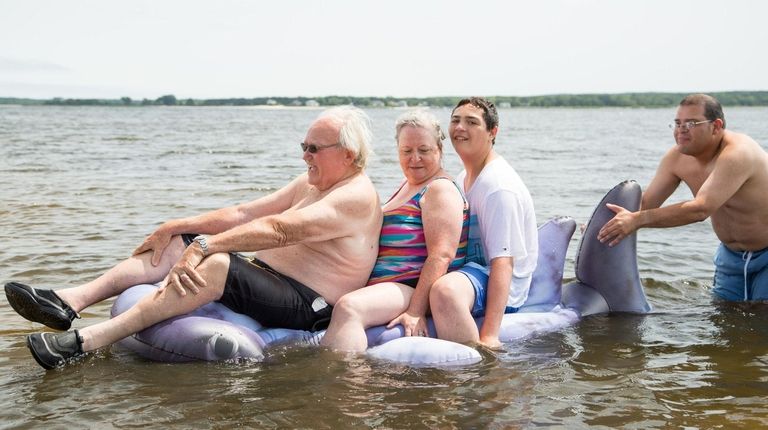 Brant and Eileen Brown, of East Islip, share a  float with their grandson, JJ, 14, during a recent camping outing at Indian Island Park in Riverhead. At right is Brant’s son, Herbert Brown. Photo Credit: Barry Sloan

“It’s the day our lives changed in a nanosecond,” Brown said, referring to the day her daughter was arrested and charged with armed robbery.

At that point, Brown and her husband were getting ready to retire and travel the world.

“We had a plan, and God laughed,” she said. “He gave us a different plan.”

The East Islip couple had to immediately take charge of JJ, Eileen’s 9-year-old grandson, because his father also couldn’t care for him.

After her arrest, Brown’s daughter, who has developmental disabilities and is bipolar, pleaded guilty and was sentenced to 3 years in prison.

“No one had any preparation time,” Brown said, explaining that JJ had been left at home with a babysitter and later learned that his mother wasn’t coming home and his dad couldn’t take care of him. “It was quite traumatic for everybody,” Brown said.

At first, Eileen, 60, and her husband, Brant, 74, the daughter’s stepfather, were thrown off kilter, encountering difficulties arranging for child care.

“We were truthfully feeling sorry for ourselves, a little angry, very overwhelmed,” Brown said.

Although Eileen’s daughter was released from prison in 2016, she was not awarded custody. Around this time, Eileen said, JJ was diagnosed with ADHD, autism spectrum disorder and intermittent explosive disorder — all compounded by the loss of his parents’ presence in his life.

The Browns placed their grandson in a residential program for several months, and they found support for themselves. They joined support groups — SASI for autism, CHADD for attention deficit disorders, and Grandparents Raising Grandchildren.

For the past two years, JJ, 14, has lived in Green Chimneys, an educational and clinical residence for children with special needs, where he will be for another year. He comes home to his grandparents from the upstate Brewster school many weekends and for vacations — like the family’s late-August two-week camping trip to Indian Island Park in Riverhead.

Brown observed that although JJ and her daughter have similar problems, she has found it easier to deal with her grandson.

“I’m older. I’m a little bit more experienced. There’s definitely more services out there than there were when I was going through this in the ‘80s,” she said.

Despite JJ’s parents’ love for him, Brown said, “They’re just not equipped to take care of him.”

As JJ gets older, things don’t get easier, she said. “The challenges become different. You just have to deal with them as they come along.”

According to the 2010 census, Suffolk County had the highest number of grandchildren living in households headed by their grandparents (29,591) in New York State, second only to New York City, noted Dinah Torres Castro, who coordinates the Relatives as Parents Program for the Cornell Cooperative Extension of Suffolk County.

Most people think caring for their grandkids will be a temporary arrangement, Castro said. “The truth of the matter is that most grandparents that take in a grandchild wind up taking care of that child for seven years or more.”

In addition to the five grandchildren they’ve helped care for over the years, while their children were working, Marie and Roger Dextra are now raising three grandchildren.

“They always thought when they’d get older they’d move back to Haiti,” said Marmeline Martin, an outreach worker for North Shore Child & Family Guidance Center’s Caregiver-Grandparent Respite and Support Program who has worked with the family. “But they can’t, because they have to take care of their grandchildren.”

For the past seven years, Brianna, 12, Brian, 11, and Ronald, 10, have lived at the Dextras’ Westbury home because their mother’s severe depression prevents her from caring for them.

Marie and Roger Dextra, who speak limited English, take advantage of the services from C-GRASP, as the guidance center program is known. They include advocates like Martin going to the children’s school meetings on their behalf and receiving food donations from Island Harvest.

The Dextras said their abiding faith and familial love strengthen their resolve.

“God gives me the patience to raise these kids, because they don’t have anybody else to raise them,” said Marie, 73.

Despite the many burdens and hardships, the Dextras find joy in caring for their grandchildren.

The children accept living under their grandparents’ care, though their own parents’ home is nearby, Marie said.

“They understand she’s sick, and God will take care of them,” Marie said of her daughter-in-law.

To other grandparents who are raising their grandchildren, Marie offers some words of advice: “Be patient when no one else can care for them. Be a believer in the Lord to give you the strength.”

SUPPORT FOR THE LONG TERM

About one in 10 members among the 13 Families Anonymous groups on Long Island are raising their grandchildren because the children’s parents’ drug abuse resulted in death or an inability to be caregivers, said Donna D., who has 22 years’ experience in FA and is on its World Service Board and chair of its Group Outreach Committee. The 12-step program aims to provide fellowship and support for family and friends of those with drug and alcohol and related behavioral problems. In keeping with FA’s tradition of anonymity, the Islip Town resident did not want to give her last name.

She said Families Anonymous meetings can help enlighten grandparents about ways they may have enabled their loved ones’ drug abuse; learning new behaviors can lead to treatment for the parents, enabling reunification with their children and relieving the grandparents of caregiving. “There’s no judging. There’s no advice-giving. There’s no opinions,” Donna said of the meetings.

“The biggest challenges I see grandparents facing are finances, parenting issues pertaining to schoolwork, discipline and technology, needing support while going through legal issues, dealing with adult children, and, in general, emotional support while trying to raise their grandkids,” she said.

“They step in,” Giacoia said of the grandparents. “I’ve had people in my group that are from their 50s all the way up to great-grandparents that are raising their kids into their 70s and 80s.” The world has changed drastically from when they raised their own kids, she said.

PASTA (Parenting a Second Time Around), an eight-session curriculum developed by Cornell Cooperative Extension, and Grandparents’ Support Group in Shirley, can help guide grandparents through their journey.

“Sometimes when they get custody of their grandchildren, they’re totally ill-equipped to be parenting again,” said Torres Castro, noting that advancing age or juggling full-time work with child-rearing are among potential obstacles.

“We give the space for them to feel it’s OK to resent the fact that this is what they’re doing right now, but it’s also OK to focus on the child that they need to provide love, safety and security for,” she said. “That’s what the support group does. It helps them to focus on that.”

“They also have the opportunity to develop a social network with other grandparents that are experiencing the same life challenge,” Taylor-Walthrust said.

Brown said the advice and support her family has received over the years has helped keep her focused on guiding her grandson — and preparing him for a life independent from her.

“Going to support groups and knowing we weren’t alone in this was crucial for all of us, but especially for my grandson,” she said.

Meets 6 to 8 p.m., the second Wednesday of each month

Education, respite, counseling, school advocacy, clothing, food, housing assistance and transportation for grandparents who are primary caregivers of their grandchildren

Weekly meetings at each of its 13 groups throughout Long Island