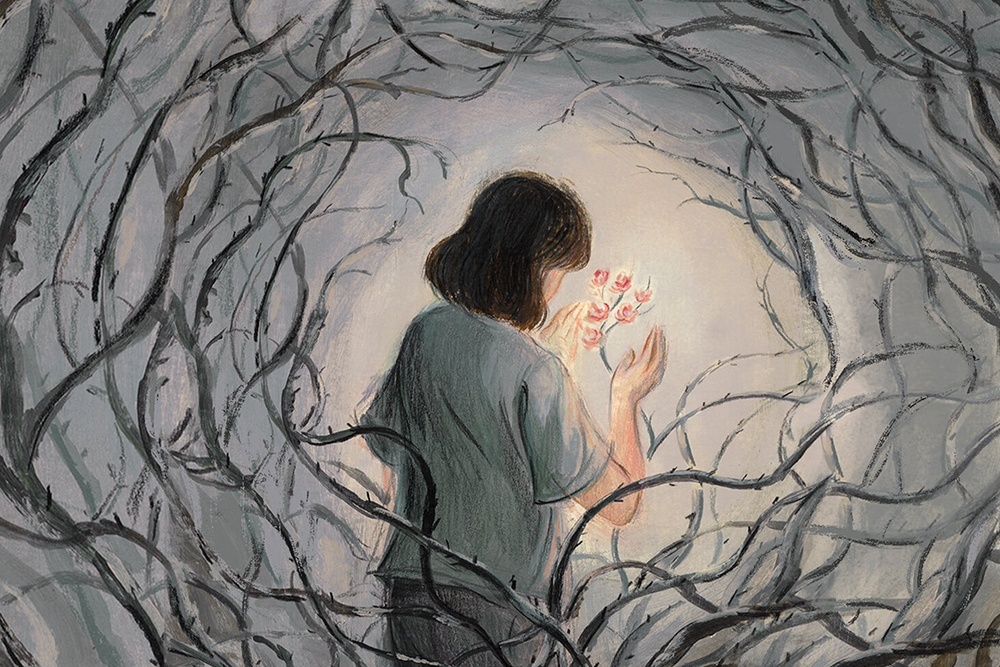 The thought of suicide is terrifying, but we have to make talking about it a part of everyday life.

Dr. Morris is a developmental psychologist whose research has focused on early childhood education. Recently, she has turned her attention to preventing suicide.

I always felt so blessed watching my boy-girl twins; even as teenagers they would walk arm in arm down the street, chatting and laughing together.

But that blessed feeling evaporated in June of 2019, when I lost my daughter, Frankie, to suicide, three weeks before her high school graduation. Ever since that day, I have thought of little else except how I could help the next struggling teenager, the next Frankie.

Several days after her passing, we opened our home up to our community, including Frankie’s very large group of teenage friends. It was a muggy June day, and the air conditioning was no match for the hundreds of people who came through our New York City apartment.

There was a momentary pause in the steady stream of people offering hugs and condolences when a parent of one of Frankie’s friends put her hand on my shoulder and said gently: “What strength Frankie had. It must have taken enormous energy for her to do what she did each day.”

That was Frankie. She had the strength to engage in school and in theater, despite her anxiety and depression. She had an ability to connect — emotionally, profoundly — with others, even when she was struggling herself. Her friends spoke to us of being caught off guard by her hugs or endearing comments. A teacher once described her as “empathy personified, with quite the fabulous earring collection.”

But like many who struggle with suicidal thinking, she kept her own pain camouflaged for a long time, perhaps for too long.

Suicidal thinking, whether it is the result of mental illness, stress, trauma or loss, is actually far more common and difficult to see than many of us realize. A June 2020 Centers for Disease Control survey found that one in four 18- to 24-year-olds reported that they had seriously thought about taking their lives in the past 30 days; prepandemic estimates found that just under one in five high schoolers had seriously considered suicide, and just under one in 10 had made at least one suicide attempt during the previous year.

That’s a whole lot of kids. And some, like Frankie, are able to muster the energy to make their struggle almost invisible. Despite 50 years of research, predicting death by suicide is still nearly impossible. And with suicidal thinking common, suicide remains the second leading cause of death among 15- to 24-year-olds, after accidents.

Like others who have lost a child to suicide, I have spent countless hours going over relentless “what ifs.” And because I am a developmental psychologist who specializes in prevention programs, my “what ifs” also include the ways the world might look different so that another family won’t experience our fate.

One day while driving on a familiar stretch of highway with “what ifs” swirling in my head, I saw a sign flash “Click it or Ticket.” It struck me: Maybe what we need are seatbelts for suicide.

“Click it or Ticket” was born in part out of a concern in the 1980s about teenagers dying in car accidents. Just as with suicides today, adults couldn’t predict who would get into a car accident, and one of the best solutions we had — seatbelts — was used routinely, in some estimates, by only 15 percent of the population. Indeed, as children, my siblings and I used to make a game of rolling around in the back of our car, seatbelts ignored.

Three decades later, our world is unlike anything I could have imagined as a child. Putting on a seatbelt is the first lesson of driver’s education; cars get inspected annually for working seatbelts; car companies embed those annoying beeping sounds to remind you to buckle your seatbelt; and for added measure, highway signs flash that “Click it or Ticket” message as part of a National Highway Traffic Safety Administration campaign. The result? Most of us (estimates range as high as 91 percent) now wear a seatbelt.

What would it look like if we had an approach to suicide akin to universal seatbelt safety, starting early in adolescence?

Just as my parents couldn’t predict in the 1980s what seatbelt safety would look like now, I am not sure what suicide prevention should look like in the future. But I imagine a world in which every health worker, school professional, employer and religious leader can recognize the signs of suicidal thinking and know how to ask about it, respond to it and offer resources to someone who is struggling. Just as today we all know to dial 9-1-1 in an emergency (a system that came into being in the late 1960s), we would all know the national suicide prevention hotline (1-800-273-TALK, which will also be reachable at 9-8-8 in 2022) and text line (text HOME to 741741). We would “suicide-proof” our homes by locking up handguns, lethal medications and other things teenagers can use to harm themselves. And families would ask their children often about suicidal thinking.

When I told Frankie’s orthodontist about her suicide, his response surprised me: “We really don’t come across that in our practice.” Even though orthodontists don’t ask about it, they see children during their early teenage years, when suicidal thinking often begins to emerge. Can you imagine a world in which signs for the prevention hotline and text line are posted for kids to see as they get their braces adjusted? Or one with pamphlets in waiting rooms that instructed parents about suicide’s warning signs?

What if the annual teenage pediatric checkup involved a discussion of one-at-a-time pill packaging and boxes to lock up lethal medications, the way there is a discussion of baby-proofing homes when children start to crawl? What if pediatricians handed each adolescent a card with the prevention hotline on it (or better yet, if companies preprogrammed that number into cellphones) and the pediatrician talked through what happens when a teenager calls? What if doctors coached parents on how to ask their teenager, “Are you thinking about suicide?”

What if we required and funded every school to put in place one of the existing programs that train teachers and other school professionals to be a resource for struggling students? A number of states mandate training in suicide prevention, some as part of the Jason Flatt Act. States like New York and California (along with 13 others) encourage, but do not mandate, such programming. A few, like Rhode Island (which incidentally has the lowest teenage suicide rate in the nation), have no mandate but have still managed to pair training of teachers with resources for students, who are often the first to notice the signs of suicidal thinking in their friends.

I recognize that despite progress identifying effective programs to combat suicidal thinking, their success rate and simplicity does not compare with what we see with seatbelts. But that doesn’t mean we shouldn’t do more.

Part of doing more also includes making the world more just and caring. To give one example, state-level same-sex-marriage policies that were in place before the Supreme Court legalizedsame-sex marriage nationally have been linked to reductions in suicide attempts among adolescents, especially among sexual minorities. Just as safer highways and car models make seatbelts more effective, asking about and responding to suicidal thinking is only one part of a solution that also includes attention to societal injustices.

I understand, of course, that asking about suicidal thinking is scary. But if it is scary for you to ask about it, it is even scarier for the teenager who is thinking about it.

I will never forget sitting with Frankie in the waiting room in the pediatric psychiatric wing on the night I brought her to the inpatient unit, three months before she took her life. We had been there for hours, seeing one group of doctors and then another. A nice nurse had given us some apple juice and granola bars. Sipping from those child-size juice boxes and munching on one of the granola bars, Frankie turned to me and said, softly, almost in a whisper, “You know, I am so glad you finally know.” I could hear the relief in her voice. I just nodded, understandingly, but it broke my heart that she held on to such a painful secret for so long.

How do we build a more supportive world for our children? I find myself inspired by Frankie’s teenage friends, who cared deeply for her and now support one another after her passing.

During high school, Frankie found warmth and healing in the theater program office, tucked behind a door in a bustling New York City public school. On good days, she would sit on the worn couch in that office, snuggle in a pile of teenagers and discuss plays, schoolwork and their lives. On hard days, she would hide in an untraveled corner of that same office and allow the anxiety and depression to run its course. And in that corner space, she would text a friend to help her get to class or, after she had opened up about her struggles, encourage others to open up as well.

The fall after Frankie left us, some students decided to remake that hidden corner, dotting the walls with colored Post-it notes. Scrawled on a pink Post-it were the words “you matter”; a yellow one read “it gets better”; an orange one shared a cellphone number to call for help. Tiny Post-it squares had transformed the corner into a space to comfort, heal and support the next struggling teenager.

I don’t know if a seatbelt approach would have saved Frankie. And I understand that all the details of such an approach aren’t fully worked out here. But I don’t want us to lose any more children because we weren’t brave enough to take on something that scares us, something we don’t fully understand, something that is much more prevalent than many of us realize.

If 17- and 18-year-olds who’ve lost a friend have the strength to imagine a world dotted with healing, then the least we can do as adults is design and build the structure to support them.

If you are having thoughts of suicide, call the National Suicide Prevention Lifeline at 1-800-273-8255 (TALK). You can find a list of additional resources at SpeakingOfSuicide.com/resources.

Pamela Morris (@pamela_a_morris) is a professor of applied psychology at NYU’s Steinhardt School of Culture, Education and Human Development.