Getting Sandy Koufax’s Autograph Was Worth the Risk

02 Apr Getting Sandy Koufax’s Autograph Was Worth the Risk

Newsday, Opinion, March 28, 2018
Getting Sandy Koufax’s Autograph Was Worth the Risk
By Andrew Malekoff 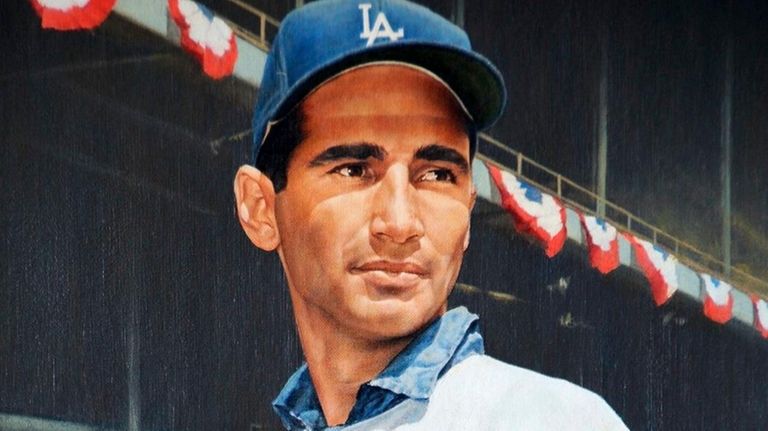 A painting of Sandy Koufax by Ron Stark from a photo of Koufax taken before the start the 1963 World Series, where he struck out 15 Yankees. Photo Credit: /

I am not the rabid baseball fan that I once was, but the start of a new season each year brings me back to 1963, when I was just 12. I was a Dodgers fan and much too young to have appreciated the devastating impact of the team’s 1958 move from Brooklyn to Los Angeles for so many fans.

My summertime ritual was to get up, ride my bike to buy a newspaper at the nearby candy store in my hometown of Maplewood, New Jersey. I headed right for the sports section and the box scores. If Sandy Koufax pitched the night before, my heart pounded in anticipation of the details.

Sometimes I clipped the articles for a scrapbook, spending hours with scissors, paper and Elmer’s glue.

One fall day in 1963, my father told me he had four tickets to a World Series game. The Yankees were playing the Dodgers. I did not get to see Sandy pitch, but I wasn’t disappointed. The Dodgers won 4-1, giving them a 2-0 Series advantage. Nevertheless, the excitement of being at the game and seeing my team triumphant was soon eclipsed.

As my mother, father, younger brother and I exited the ballpark in South Bronx, we passed an open garage that led back into Yankee Stadium. I peered in and spotted a bus. I stopped as my family walked on. As the metal garage door started its slow descent, I knew that this was the moment of truth.

When the garage door was about three feet from the concrete, I hit the ground, World Series program and pen in hand, and rolled inside along with a few other kids.

As a stadium door opened, the first one through was Don Drysdale, who would go on to pitch a shutout in game three. Next was Johnny Podres, who pitched that day, followed by the exciting Maury Wills, who broke all the base-stealing records in the early 1960s.

They signed the back of my program over a full-page ad for Sinclair Dino Supreme gasoline. The ad said, “Try a tankful today. Your satisfaction guaranteed — or your money back.”

I could feel my heart beat harder with each autograph. But where was Sandy?

I learned later that my parents had frantically searched for me, and that someone told them some kids had slipped under the garage door.

Finally, Sandy came through, but he boarded the bus before I could get to him. I was crestfallen.

Faced with another decision, I overcame my inhibition and climbed up the bus stairs. I asked a player sitting in front to pass my program back to Sandy. It came back with his signature. I was soon escorted out of the garage, to my parents’ great relief. I was floating on air. The glow lasted for days.

With each new season, I wonder back what that day and those precious moments and split-second decisions would have felt like if I hadn’t been in it for love, but for the money that a celebrity’s signature might bring. Later, my mom framed the front and back covers together. It hung in my bedroom for decades, well after I moved out. I took it with me to Long Beach after I got married in 1980. It’s out of the frame and I keep it in a night table drawer.

I am so grateful for that day, and for not knowing that an autograph could be worth anything more than a wonderful moment to be preserved for a lifetime.