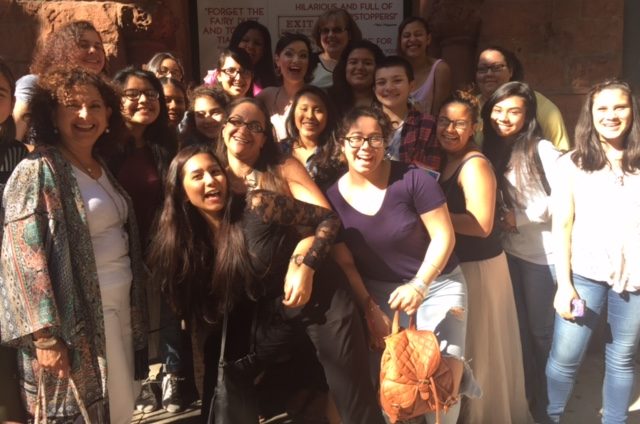 At North Shore Child & Family Guidance Center, we not only provide counseling, but we also offer some very innovative programs targeted at specific needs and sectors of our local communities.

One of those programs is the Latina Girls Project, which was created to respond to the alarming rate of depression, school refusal, self-harm, sexual abuse, suicidal ideation and attempted suicides by Hispanic girls, ages 12-17. In addition to bilingual individual, family and group therapy, the program incorporates a youth enrichment component that is comprised of monthly supervised outings to places such as theaters, museums and other cultural and educational sites. These trips also offer respite to the parents who are relieved to know that their daughters are in safe hands and doing worthwhile things.

All of the trips are sponsored by our very generous donors, John and Janet Kornreich.

In celebration of Hispanic Heritage Month, here is a summary of two recent trips:

We had a great turnout for our trip to Muse PaintBar in Garden City. At first, some of the girls said they had no artistic talent and were a little nervous about painting. But the instructor was great, and assured them that everyone has an inner artist! The instructor told them not to feel like they should copy exactly what they saw; instead, she said it’s like handwriting, where everyone has their own individual style. The message was that you are 100% good enough just the way you are, and that you can do so much more than you thought possible.

What was so impressive was how the girls’ level of concentration was so strong. Many of them say they have trouble concentrating in school, but they were fully attentive when it came to being creative.

In addition, the girls are so respectful of the space they are in. There is no cursing, or pushing, or teasing. They even make sure the van is clean after we use it. Part of what we teach them is how to behave appropriately in the world. This goes hand in hand with developing self-respect, which is a key component to emotional well-being. Their behavior makes all of us very proud—and it rightfully makes them proud of themselves!

A Day at the Theater:

For another recent trip, we saw a wonderful musical called The Buddy Holly Story at The John W. Engeman Theater in Northport, a beautiful venue that uses professional actors directly from the Broadway talent pool.

Even though Buddy Holly lived well before their time, the girls were fascinated by his story. Buddy was a young person who went after his dreams, despite any obstacles that faced him, and that message was inspiring for the girls. He was also someone who broke tradition by playing at the Apollo Theater, which at that time featured only black performers.

There is an especially meaningful scene when Buddy gets on stage at the Apollo and both he and the audience are surprised that, as a white man, he is the featured talent. But once he began to play, it was clear that what is on the outside in terms of race and color isn’t important; the message that diversity should be welcomed was one that the girls could truly appreciate.

They also were surprised and delighted to see that Buddy married a Latina woman and also that Richie Valens, who sang the still-famous song La Bamba (which the girls knew), was part of Buddy’s tour. The girls experience racism in their lives regularly, especially in these times when immigrants are looked down upon by some people in our country. They were uplifted by this story’s very inclusive and positive message!

To learn more about the Latina Girls Project and other Guidance Center programs, visit www.northshorechildguidance.org or call (516) 626-1971.